If Nogaro was missable, the next night was to be very memorable.... The walk passed quickly - vineyards, forest, mud... and some more mossies. They 'like' me and I received more evidence to prove it! 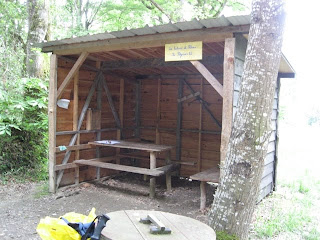 Somewhere in the middle of the forest, this little cabin for pilgrims appeared. Mostly you never know who erected these treasures. 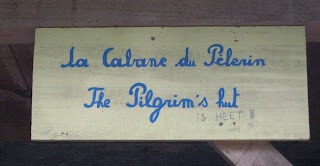 It was great to have a place to sit and eat some lunch. A couple arrived who had also walked from Le Puy, and the woman was feeling quite tired today. For her, the appearance of this little cabin was like a miracle, and it made her very happy to be able to relax here. 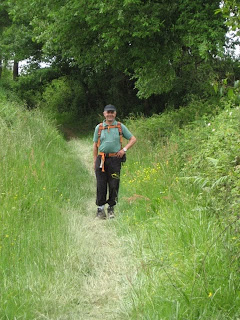 I met Alain again on the track, for about the third or fourth time, so I took his photograph. He has a unique method of doing the Chemin. He has a bicycle on the back of a campervan. Each morning he cycles and locks his bike up somewhere along the route. Then he walks back along the path to where he spent the night, and then drives to where his cycle is. So, as he is walking backwards, he gets to meet everyone along the trail, often on more than one day. (And in fact the next time I saw him, he got his camera out and took a photo of me!) 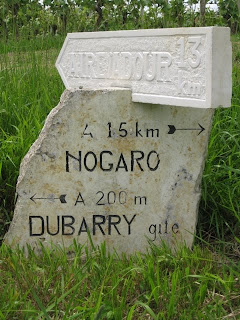 The handmade, home-made signpost for Gite Dubarry gives an idea that it is in fact a special place. The country couple who run this gite are lovely people. I was told that I was the first Kiwi visitor for this year, and that usually they see about 3-5 Kiwis a year. Last year they had a Kiwi there who was living in Switzerland, teaching snowboarding. 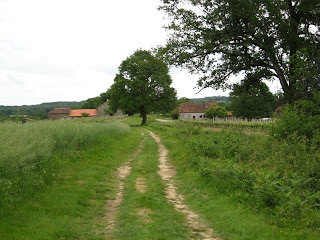 They were in the process of building a new gite next to their house, but it wasn't quite finished. (It has been finished now though and someone I know who stayed there raved about how beautiful it was!) I arrived and was then transported by van to a local house, where I found my Quebec friends already in residence. We spent a relaxing afternoon, feeling very much 'at home'. In the evening we were picked up by van again and taken to the family home where we had a delicious dinner. The home is full of various bits of sculpture that Philippe has done... he is quite an artist. And he drew a 'sheep' design for the 'stamp' in our credentials, very special. 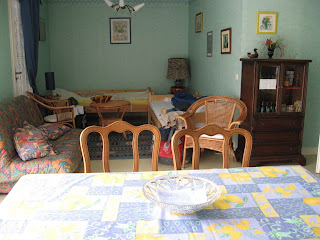 Gite Dubarry was a wonderful gite, but I was a bit lucky to get a bed here! The accent in this part of France is a bit different from further north, and the way I say demain/dimanche (tomorrow/Sunday) is not 'correct' here.... and they had expected me the day after I had telephoned. Luckily there was still a bed, and my Quebec friends who had already arrived assured the man that I was coming today. (After this, I always included the date when I rang up to reserve, especially if it was for a Sunday!!)