I didn't sleep all that well, worried about enduring another long day of rain out in the open alpine region by myself, but I adopted a typical Kiwi approach today and wore polyprops under my shorts. It got me some strange looks during the day but it kept me much warmer! 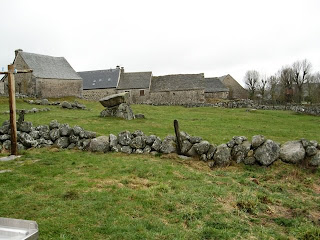 Here you can see the local stone building style, clearly built to protect from the alpine conditions. 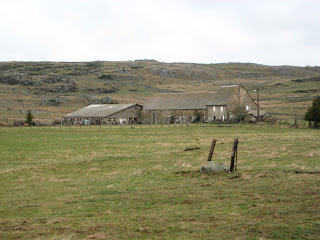 There had been several 'solo' women staying the night in the village, and here is one setting off, dressed up against the rain and cold. I couldn't walk as fast as she could, and I wished she couldn't walk so fast, leaving me behind... I would have dearly loved to be with a companion for the walk to the top of the pass. But I had to 'be brave' and continue.... 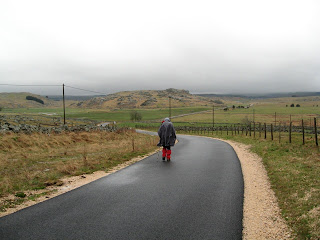 The rain actually kept away for most of the morning, and I took the host' s advice to walk the first section on the road not on the track, which she said would be too boggy after all the rain. 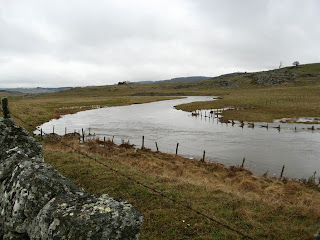 Rivers and streams were overflowing. I have seen summertime photos taken at this same place, and the stream is quite small.... 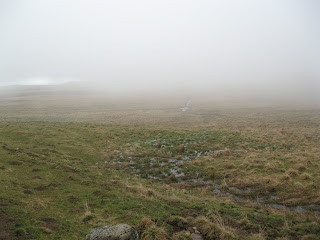 And as I took the road from Nasbinals to Aubrac, the mist came down 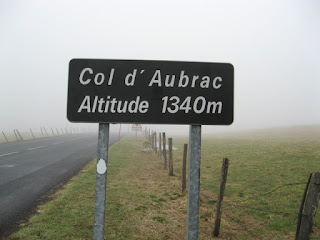 until finally nothing much at all could be seen.

Near the top, a couple of old monastic towers suddenly loomed out of the mist.
I truly felt like a medieval pilgrim then, my heart lifting at the sight of the rounded towers. I was aware that for those in earlier centuries, the bells rung from such towers would have been crucial in weather such as that today, to bring pilgrims to a safe and sheltered place. In Golinhac a few days later, I met two women who had crossed the pass the day after me: it was snowing, and they did not even see the towers at all- they could barely see their noses.... 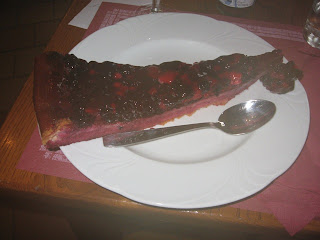 For modern pilgrims, shelter was in the form of restaurants. I was almost bemused by the variety of buildings around, until a French acquaintance noticed me and called me inside one of them. There I discovered there were cheery pilgrims by the dozens. I had soup and this enormous tart, great nourishment for walking.
The farmers at Nasbinals were finding it hard I heard as their cows are usually in the fields by now, but this year it has been too cold...

I took the Chemin from Aubrac, instead of the road, and was surprised that nobody passed me... it seems that others had heard advice to take this section by road and some even used taxis. I was surprised to see how full the gite was already when I finally made it down the hill!!! But I did not always grasp information in rapid French conversation.... 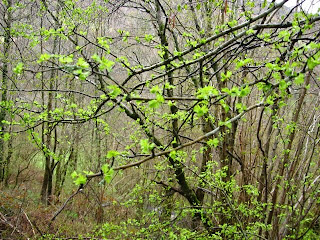 Indeed it was a difficult dangerous descent by the path, slippery on the stones with water running down making the path like a stream in many places, and streams were rushing full. But it was an adventure! 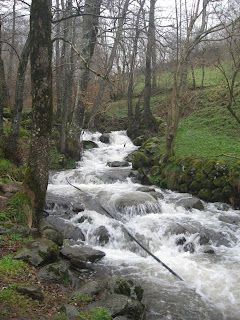 This descent gave my feet a real pounding, and my soles were becoming very tender as I walked in saturated socks. It required concentration on such a tricky path but the consolation was that I moved seasons and saw closely the change from winter on the Aubrac Plateau, to spring as I came closer to St Chely. It had been daffodils and crocuses on high but they disappeared to be replaced by a huge array of spring wildflowers lower down.

2012: What a difference a year and a couple of weeks can make. This time around, I enjoyed the most magnificent views all the way across the Aubrac Plateau. 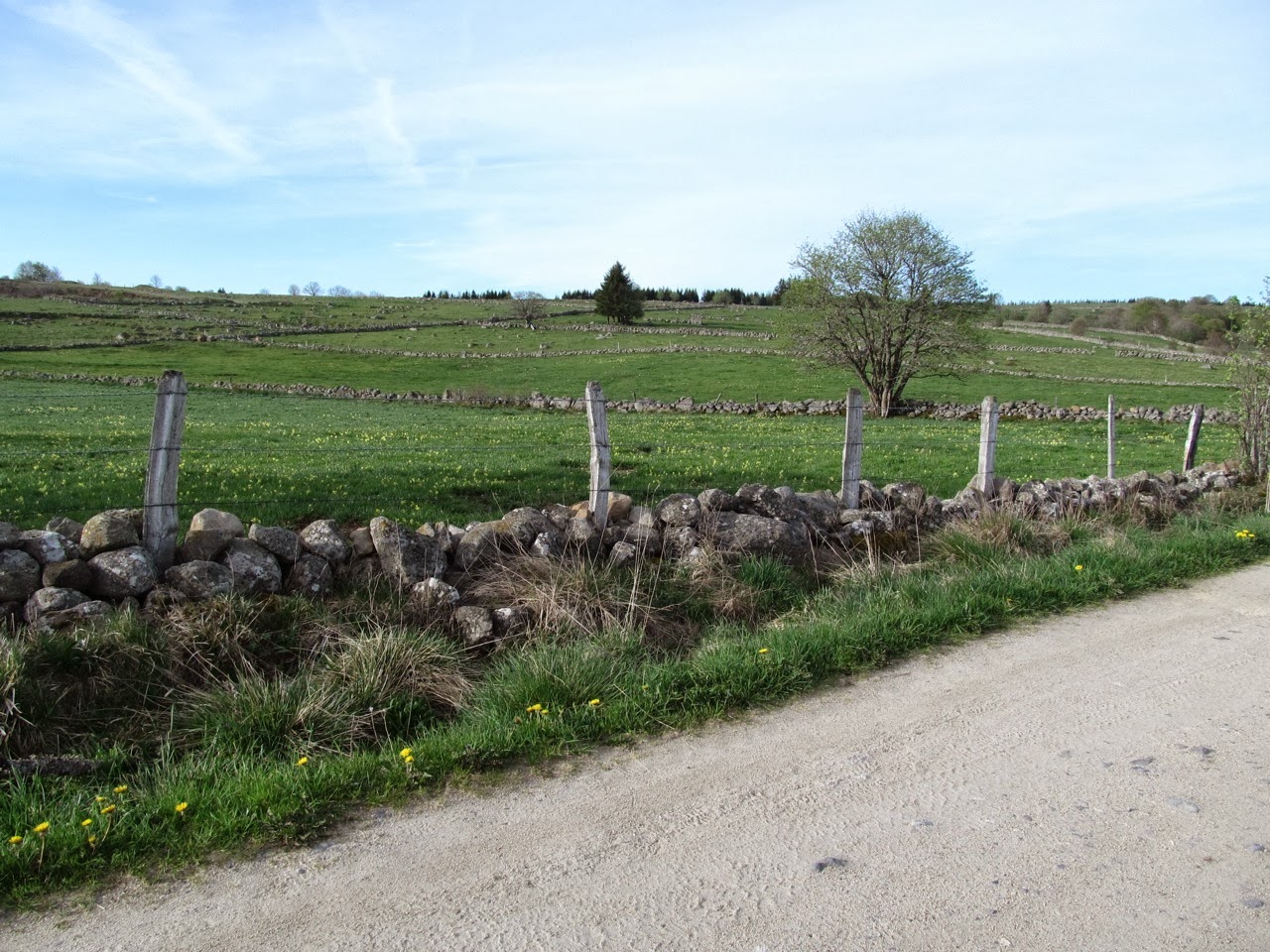 There were fields full of daffodils. I saw the hills and the stone houses for the shepherds- whereas last time I could barely see my hand in front of my nose. I started a bit earlier than most, so walked all alone in this splendid, majestic place for an hour or more- pilgrim joy in my heart! 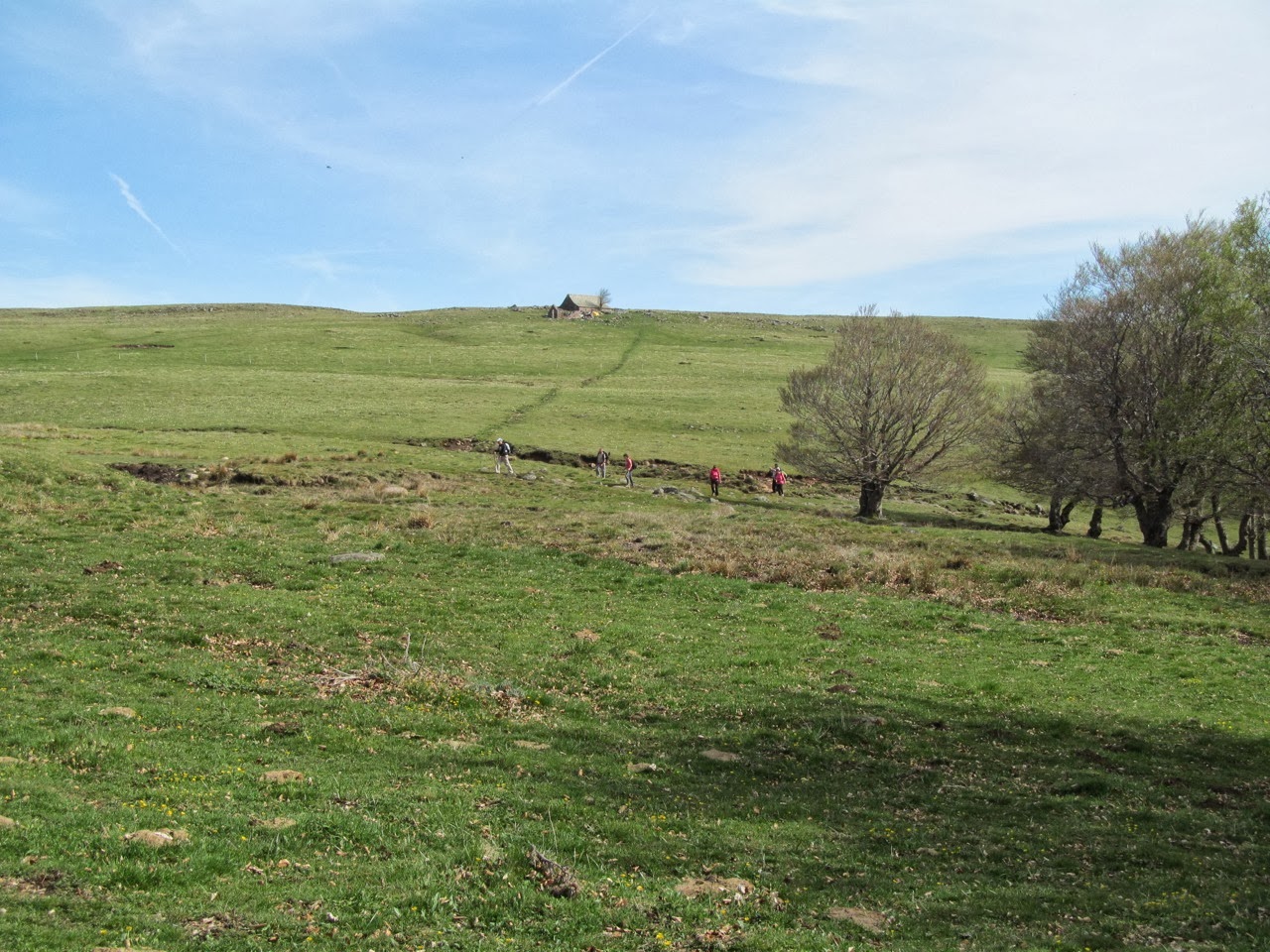 But after I stopped and had a drinks break, others appeared to share the landscape with me. 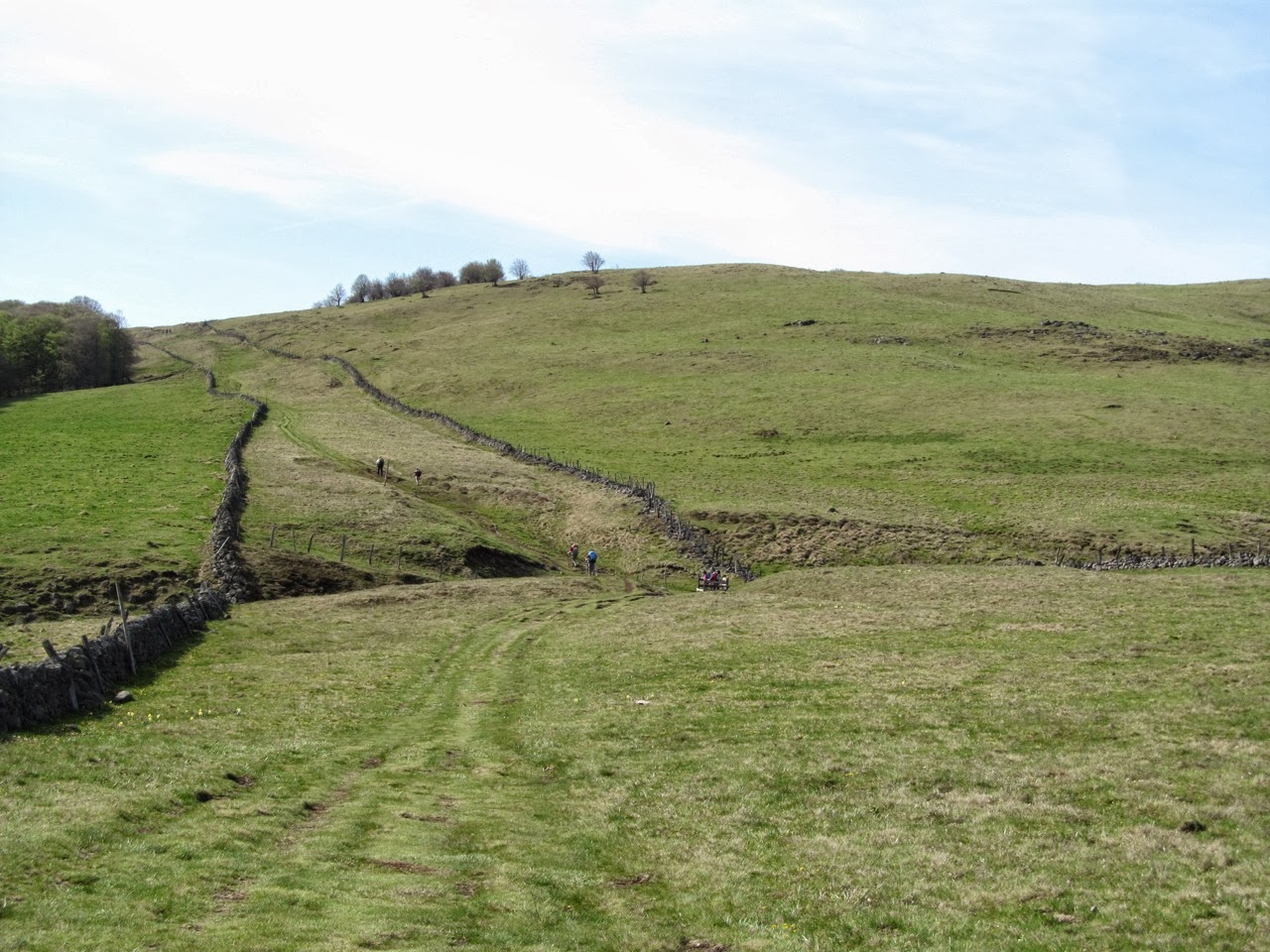 I have seen photos of this exact place- I recognise the shape of the hills- when the land has been covered with snow in March or early April. 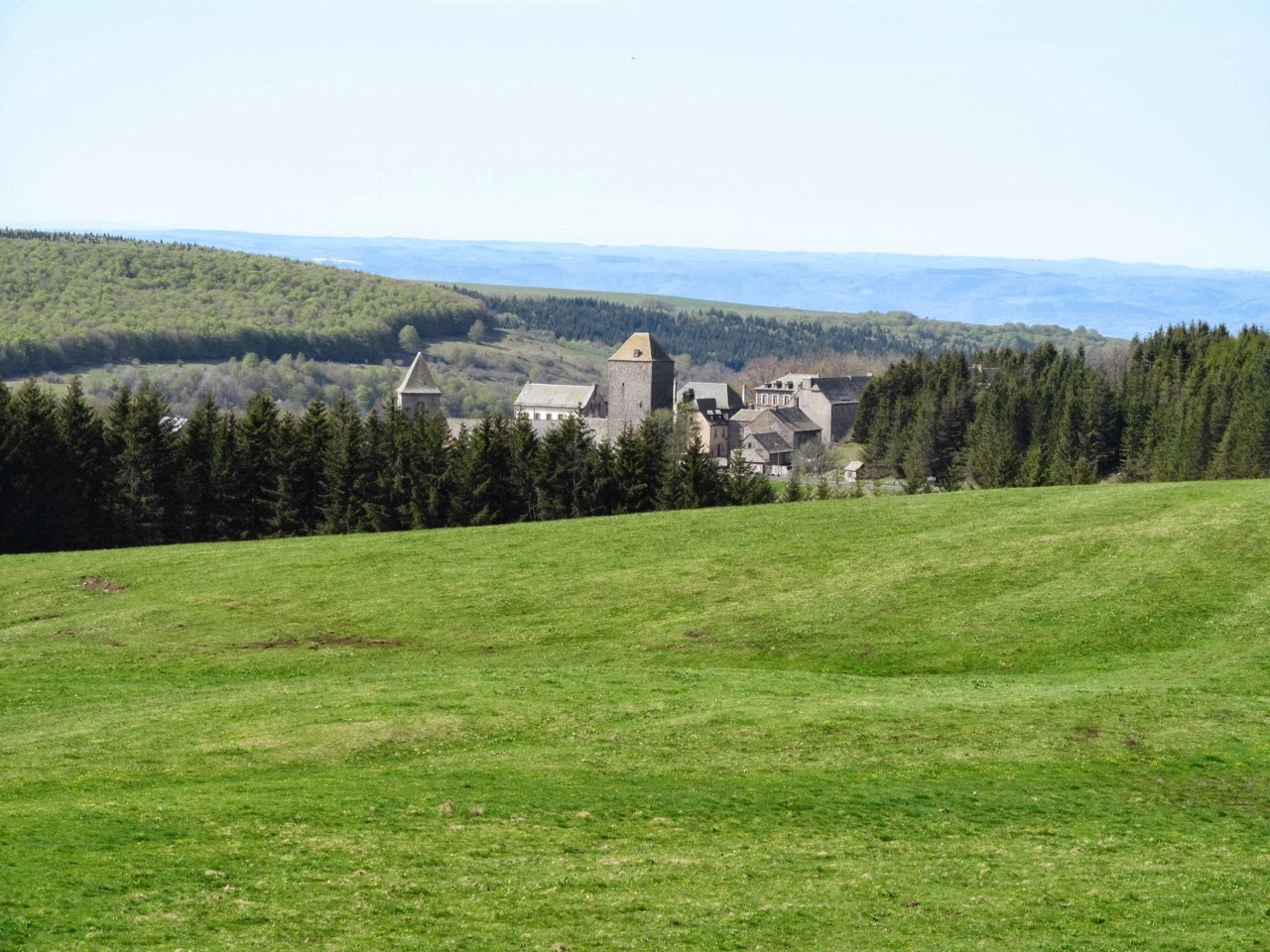 Finally I was at the top, though I never realised it, and very soon I saw the old monastery church buildings below. I thought of the pilgrims in days gone by who had needed the bells to call them to a safe place in bad weather. Interestingly, when I got close to this church in 2008, I just saw the towers looming out of the mist, and thought they were round. On a clear day, it is obvious they have been square all along! 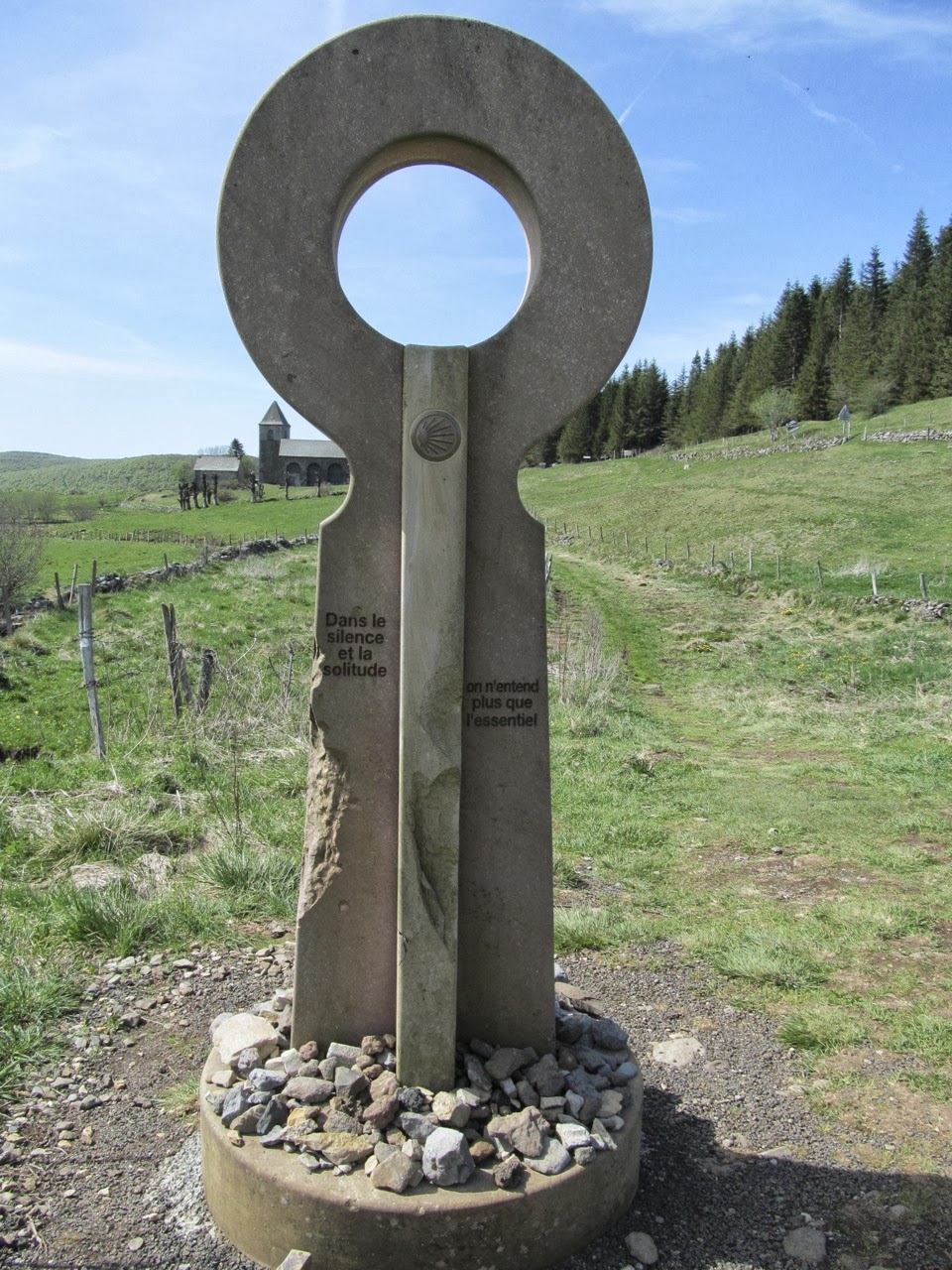 After descending towards the church, you see a modern sculpture ahead on the path: "Dans le silence et la solitude on n'entend plus que l'essentiel."("In the silence and solitude, only what is essential matters."- thanks to Michèle for the translation.) I don't remember seeing this sculpture in 2008- I think I was still walking on the road because of the mist. 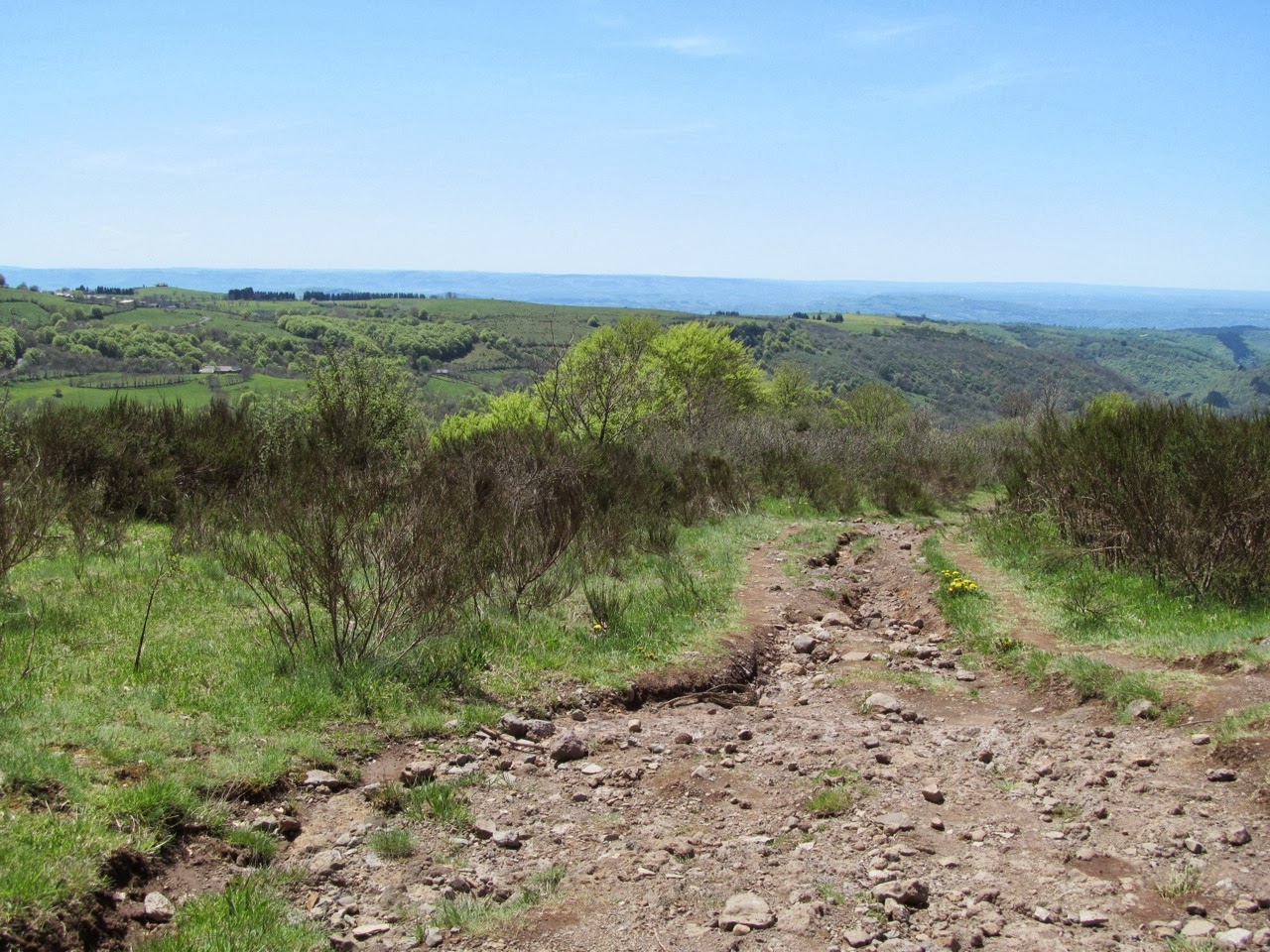 I spent time in Aubrac, exploring the inside of the church, and sharing time outside the cafe with others. A French lady there even paid for my drink, and told me that one of her children had spent six months in New Zealand, and had been treated with such kindness that she wanted to repay the favour a little. Then it was time to make the long descent to St Chely d'Aubrac. This time though, I wasn't in mist or rain. In fact it was very warm, and when I reached the town, the temperature was over 30C. Yet I was told that two weeks ago, snow had lain 60cm deep there.
I hadn't been able to get hold of the Tourist Office to book a bed in the gite communale where I had stayed last time- and in the event, it turned out it was full. However, the TO was downstairs, and they had soon booked me into a local private gite where I was very comfortable. The hardest bit was walking there, just a few hundred metres, but the heat was brutal along the tarmac!