With heat in mind, L & D & me left Cacabelos slightly before dawn, and enjoyed laughing at the chorus of competing roosters. First part of the route was by road, but we were soon off on a route that took us more past villages

and through the countryside, passing many vineyards 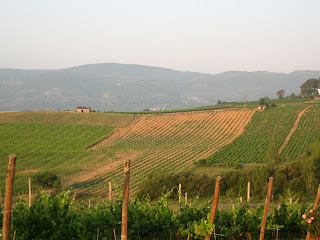 until we reached Villafranca del Bierzo. 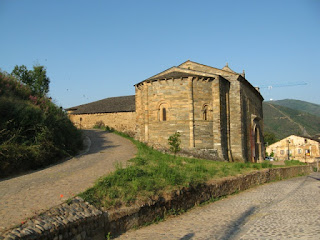 I found this to be an interesting town, with a castle and church high up above a river.
We enjoyed a drink here at a bar overlooking the river. Here L decided that her knee had become too painful for more walking that day, and a taxi was arranged for her to go onwards.

It was back to walking alongside a road unfortunately, though it wasn't as busy as I had feared, and the walking track was well protected from the passing traffic, and you could sometimes hear the river nearby. (Yes, you are right, I piked on the option for another path that involved a steep climb, choosing to save my flagging energy for O'Cebreiro.) 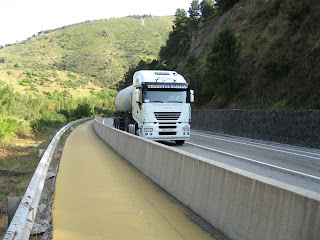 In the village of Pereje an old man urged us into the beautiful village church. 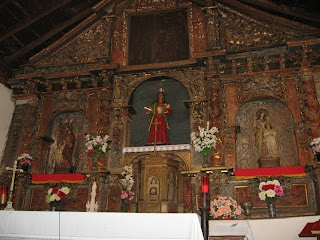 Soon after this, the temperature got a lot hotter, and I decided to stick with my new '20km is enough if it gets hot' policy. 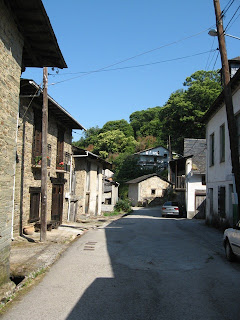 So when I reached the next village of Trabadelo, I decided to stop there, even though it was not long after noon. It meant saying goodbye to D for the time being, and it would be several days before I caught up with my Quebec friends again. It turned out that L was verbally abused by another 'pilgrim' who saw her getting out of her taxi. Be careful when you are sanctimonious about pilgrims having to walk every step: L had walked from Cahors, and had completed far more than the CF distance before she ever resorted to a taxi. The person who abused her had no idea how much pain she had been writhing in some nights and days with her damaged knee... 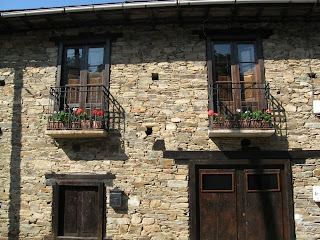 Not many people stopped in the village of Trabadelo, and I had this room to myself all night.... 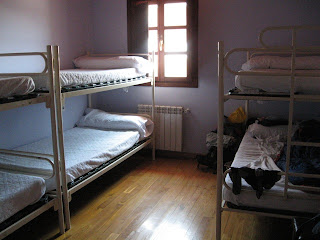 I lunched in a local restaurant. And there I met an elderly German man who had also started from Le Puy. He had been walking a bit faster than me at the beginning. I had often thought of him, and thought that perhaps he might have already finished. But it seemed that his body was getting more tired now, and he was finding the descents hard, so he had slowed down his pace. 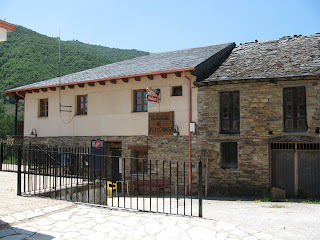 Despite the main road passing not far away, the albergue was very peaceful, and the local woman who ran it kept it absolutely scrupulously clean. I decided to use the washing machine and dryer to clean all my gear including sleeping sheet etc. There are often hidden advantages to choosing smaller villages to stay in.....