"Sarria" is a place name you often hear people talk about before you even start the Camino. It is here that people often start if they want to walk the last 100km that you need to walk to obtain a compostela. So I guess I knew we might be seeing crowds from here on in.... 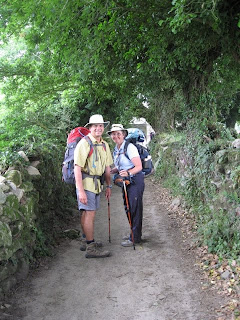 It was a peaceful start to the morning though, with mist in the shady lanes.
I suppose I had imagined the 100km marker might be something special. I was disappointed to come across it and find it covered in so much ugly graffiti. 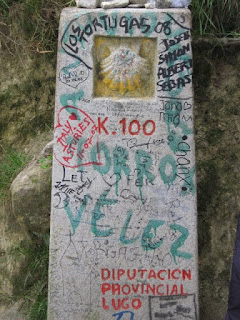 The countryside we passed through was beautiful though. 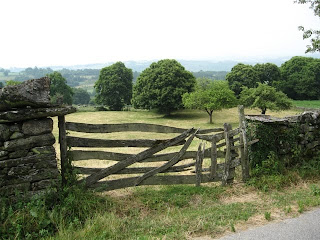 As the mist lifted, there was less shade around, and the day became much hotter for walking. Maybe largely because of the heat, I started to not cope so well: I felt quite overwhelmed by the numbers and the large groups that began appearing on the track as we came closer to Portomarin. 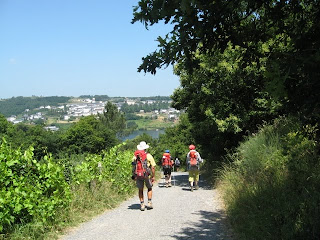 There were people with large noisy radios, and others having loud mobile phone convos. This was not the peace I had become accustomed to, and I hated the thought that it might be this noisy and crowded for the last few days. (Luckily it was never quite this bad again: it must have been worse as it was Sunday!) I was so close to the end, but it was on these last few kms heading downhill into Portomarin that for the very first time I felt like 'giving up' - deciding the Compostela was not 'worth it' and I would just catch a bus to Santiago from here..... Luckily after a good night's sleep I felt more sensible again!!!

Portomarin has a 'lake' due to some of the land being drowned for a hydro dam. But it still looked very picturesque. This was the view from the private albergue we ended up staying in. 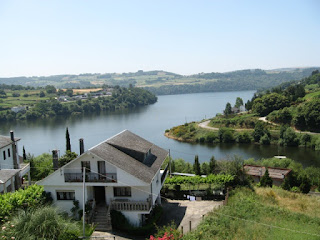