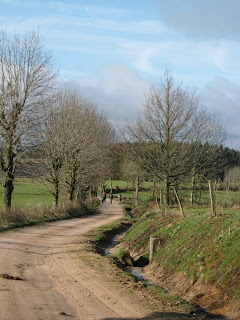 For the last time I shared breakfast with the family from Anjou
as they were finishing their 'week' this morning, with plans for another week's walk in summer. 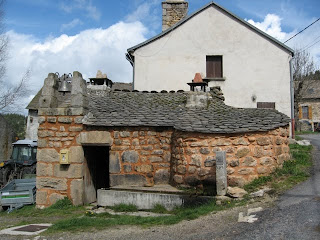 The architecture was changing in this region: this was something I liked along the whole route in France- seeing how the buildings differed in each new region. This particular building with its rounded end seemed to me to be from a much earlier era.... 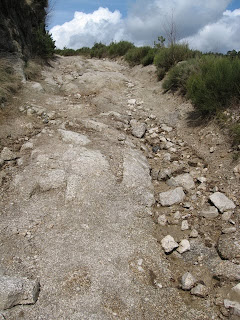 I guess that I had been surprised so far along the Chemin that the paths had seemed so well 'manicured' compared to what I was used to at home. I had a feeling of excitement as I came to this wee climb that finally seemed more rough underfoot. 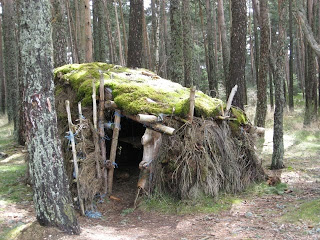 In the forest there was this mysterious wee hut..... 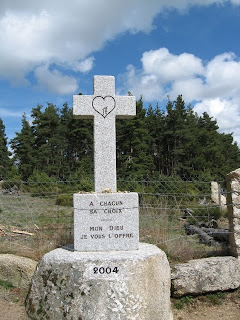 This particular day I had the first chance to check my e-mails, and one e-mail brought some hard news about a family at home. I stopped at this cross to pray for them, so far away.

The snow had all melted
but descents and ascents remained....
There was a steep descent into Saint-Alban-sur-Ligmanole.
This seemed to be the story of the route near Le Puy- and by now I had a rule in my head- "For every descent, there is an equal and opposite ascent!"

Old crosses along the way are reminders
of how many have walked this route. 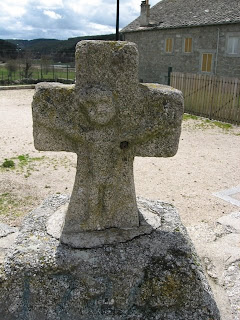 I reached Aumont-Aubrac for the evening
attended evening Mass in the restored Romanesque church
with modern stained glass windows.
It was sunny and warm this afternoon,
such a contrast to yesterday. 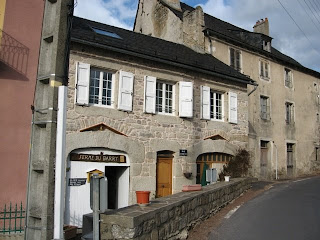 At the gite, la ferme du Barry
I met old faces and new ones
and began to meet more pilgrims walking for the 'long haul'
many more of them walking on their own
so I started to feel like not such an oddity!

The gite owner, Vincent, arrived with fresh strawberries for the meal he was creating
a local meal to remember
giving welcome energy for the crossing of the Aubrac plateau that lay ahead.
His specialty was aligot- and I have seen photos of him creating it on quite a few people's blogs -created with pride and drama!

2012: This year I walked from La Clauze to a farm just after Le Rouget. It was a public holiday, so I thought I might be a little hungry at lunchtime, but it was great to discover that Le Sauvage now had a restaurant, and I arrived right on lunchtime! Had a delicious walker's plate for 10 Euro with Brigitte and Christine, and it hit the spot nicely! This time around there was a lady in the chapel of St Roch so we looked inside and used the stamp in our credencials. I stopped for the night at a gite attached to a working farm out in the countryside, and again it was run by very welcoming people. Very well heated with a fire on a cold night. 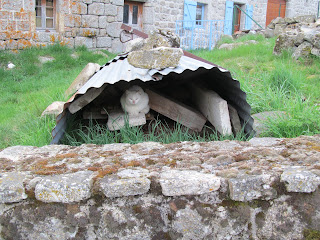 cat sheltering near gite as I left La Clauze 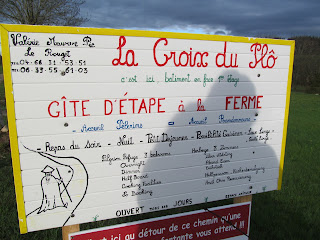 sign and gite after Le Rouget, at the windowed end of this large barn 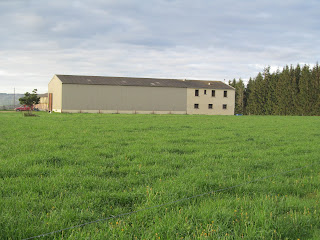 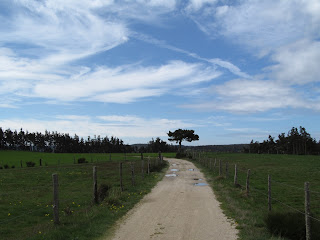 landscape on the way to Aumont-Aubrac 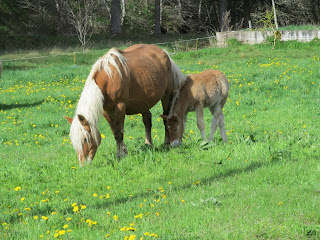 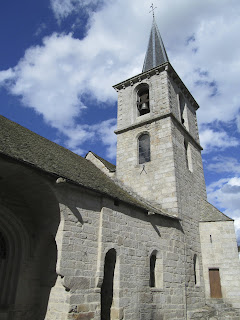 church at Aumont-Aubrac in the sunshine 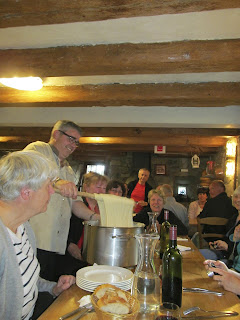 Next day I walked on to Aumont-Aubrac, and it seemed that Vincent remembered me from four years before. I was surprised, but I guess not so many Kiwis pass this way. Last time I was here it was cold and there was no sunshine, and I thought the town looked quite 'grim'. But this time the stone buildings all looked so much more 'friendly' in the sunlight.