I had an enjoyable evening in St Chely, joining a few others for a delicious meal in a local restaurant. The municipal gite in St Chely was very warm and comfortable, and had a huge kitchen/lounge communal area. But, oh, the wake-up call was indeed a shock.... they set off the fire alarms to wake us all!!!
There is an historic pilgrim bridge that leads you on the way out of St Chely - but conditions were too marginal to take a photo. Yes, rain again.... 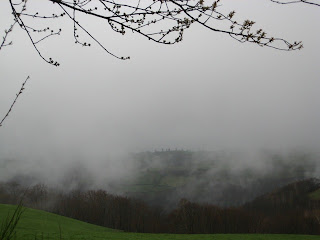 The route was quite tricky in places with mud, so I was walking slowly and carefully. 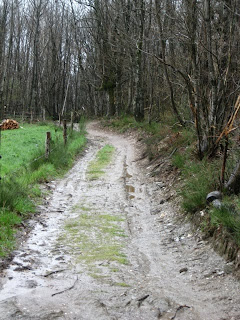 At one point, there was knee-deep icy cold water on the track that needed to be waded through, and I do mean icy!! 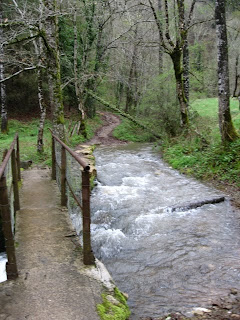 I was aware that at some point I might even find streams that were too dangerous to cross- but luckily that never happened. Trying to keep socks dry to help prevent blisters was not a possibility, and trouble was brewing on my feet. 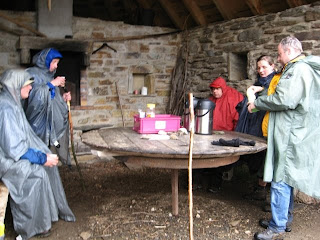 But after two hours, suddenly a welcome hot drinks stop appeared and a very friendly farmer and his father arrived to chat, the instigators of such pilgrim comfort in the cold and wet.

This kind of pilgrim kindness was not so uncommon on the Le Puy route, and was always a pleasant surprise. In the wet conditions this morning, it did a lot to lift morale and raise a smile. A little later I passed this 'water point', with a tap and bucket underneath. It seemed like someone had provided this privately for the sake of passing pilgrims. In the weather conditions of today, I was not exactly in need of water, but passing summer pilgrims must be very grateful for this. 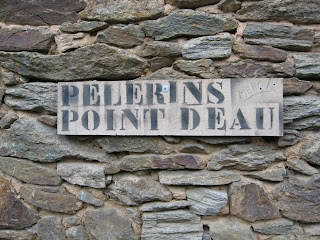 The rain continued heavily until noon when it eased off a little. By 1pm I was running low on energy- I hadn't eaten much for breakfast which was a mistake- then suddenly a lunch stop appeared on a farm. Mme Muriel at Grezes had the local specialty crepe -just what I needed- 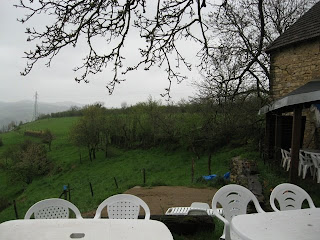 and the views from her farm were lush and green, and quite beautiful despite the rain. The food gave me renewed energy for the last 3km until arrival in Saint-Come-d'Olt 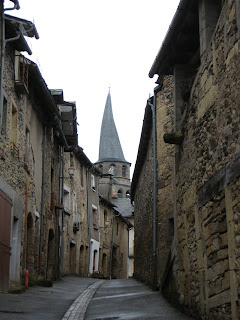 where the street, approaching the church and this crooked steeple, was full of houses that displayed the shell and the Chemin link was clear in this town. 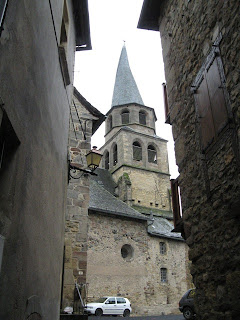 I stayed in the communal gite 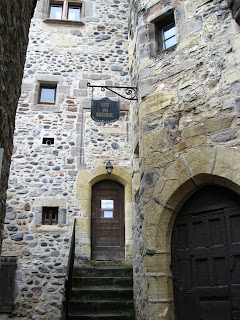 historic itself, and my bedroom on the top floor gave me a view straight to the steeple. 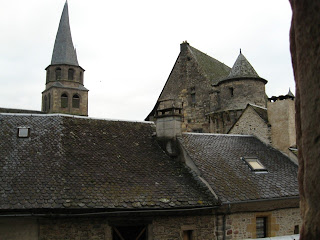 This steeple didn't end up being crooked by accident: there are others around that were built like this. The whole town was a museum: walking the streets was a special thing in itself. I have seen some glorious photos people have taken here in better weather, with sunshine! 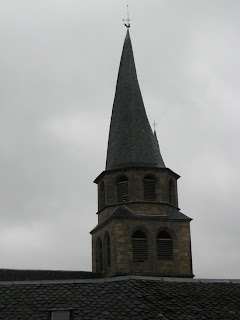 This was just one of many historic medieval towns I was to pass through along this route. Many of them are not well known like those on major tourist routes, but they were fascinating places to explore.

2012: There's not a whole lot more I want to tell you about this section of the walk, but I have to post some photos of what it all looks like in sunshine. Again it was about 30C or so- quite hard walking in the heat at times- but so beautiful with all the spring leaves and flowers. 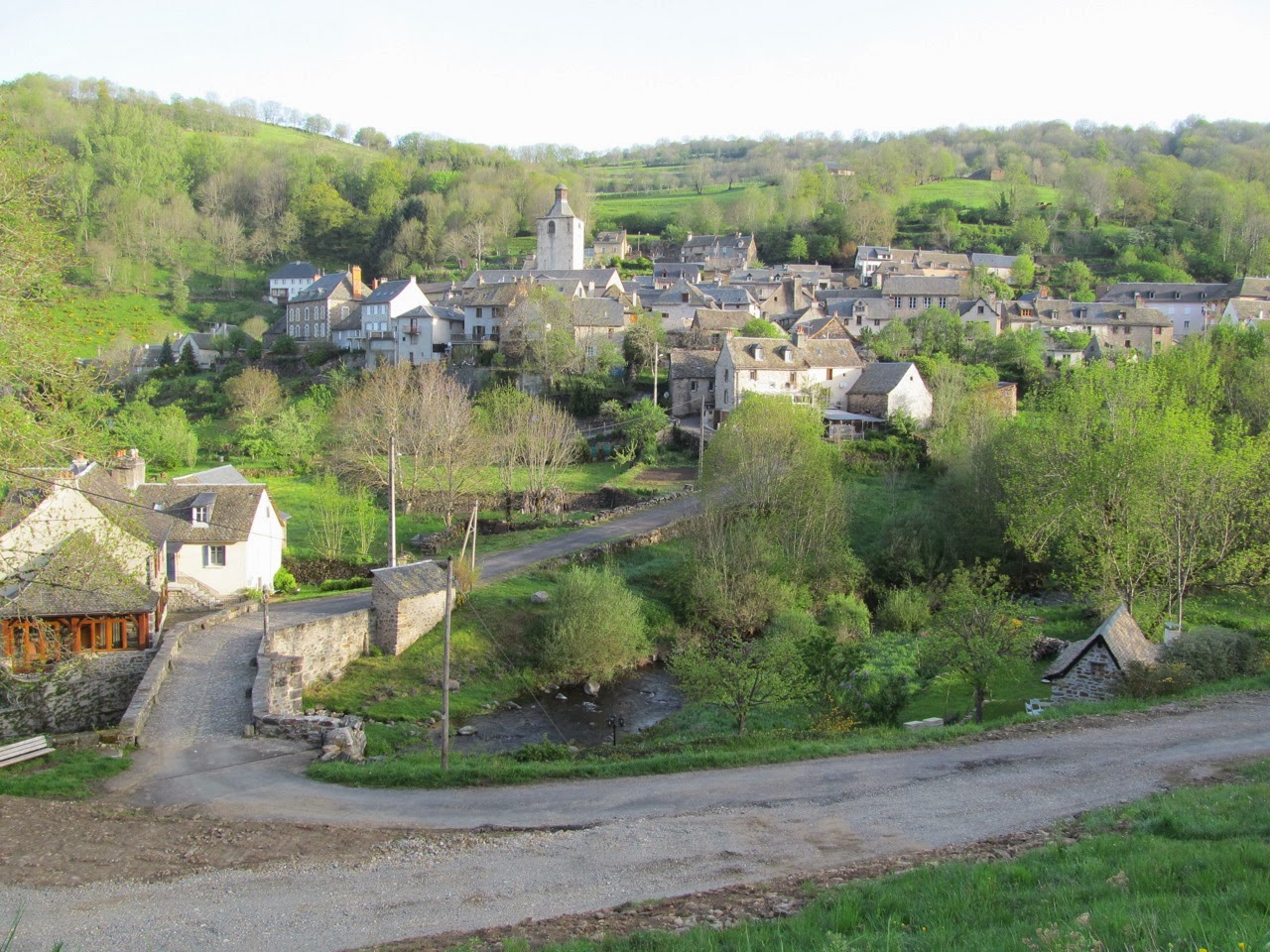 This time I could see the view back to St Chely d'Aubrac in the morning sunshine. That's a UNESCO recorded pilgrim bridge in the foreground at the bottom of the hill. Places like this where you know pilgrims have trod many centuries before are very special places. 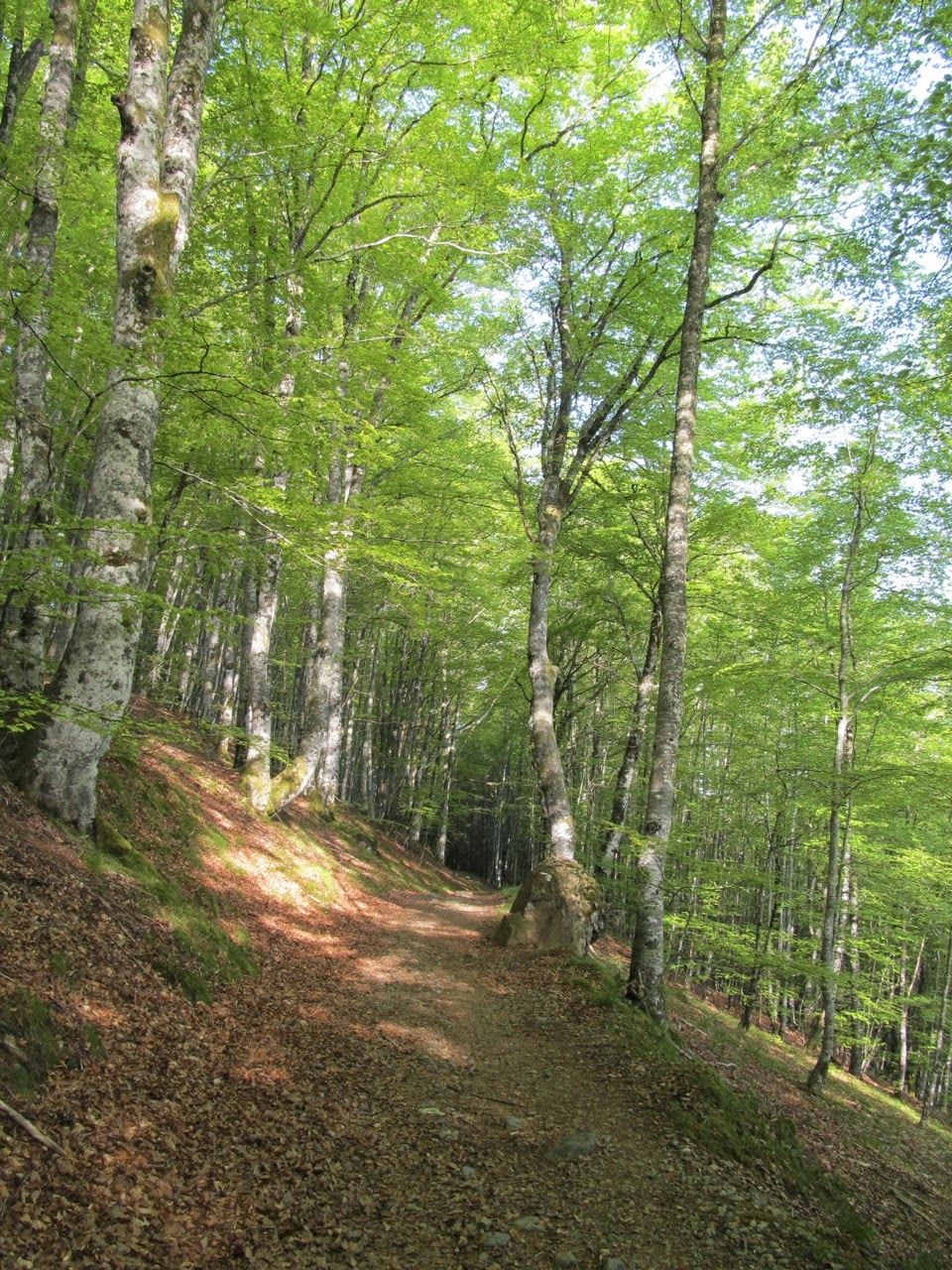 The spring leaves were on the forest trees, and the fields were full of wildflowers. 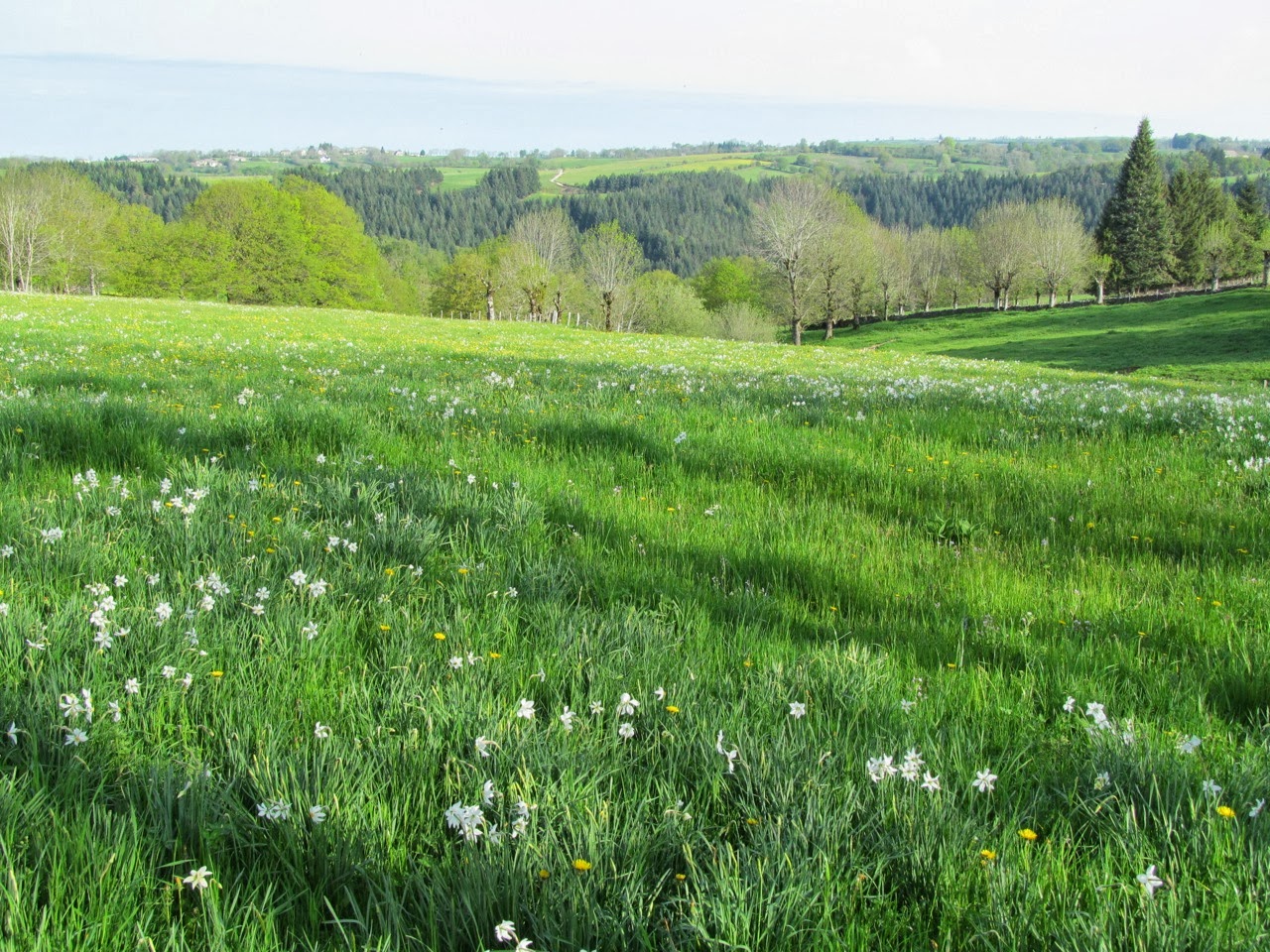 You'd think that since I had spent all that time alone on the Cluny route, I would be glad of some company. But actually, I found the conversations of this group of Germans walking near me to be so loud I had to wait behind until they had moved well ahead of me! 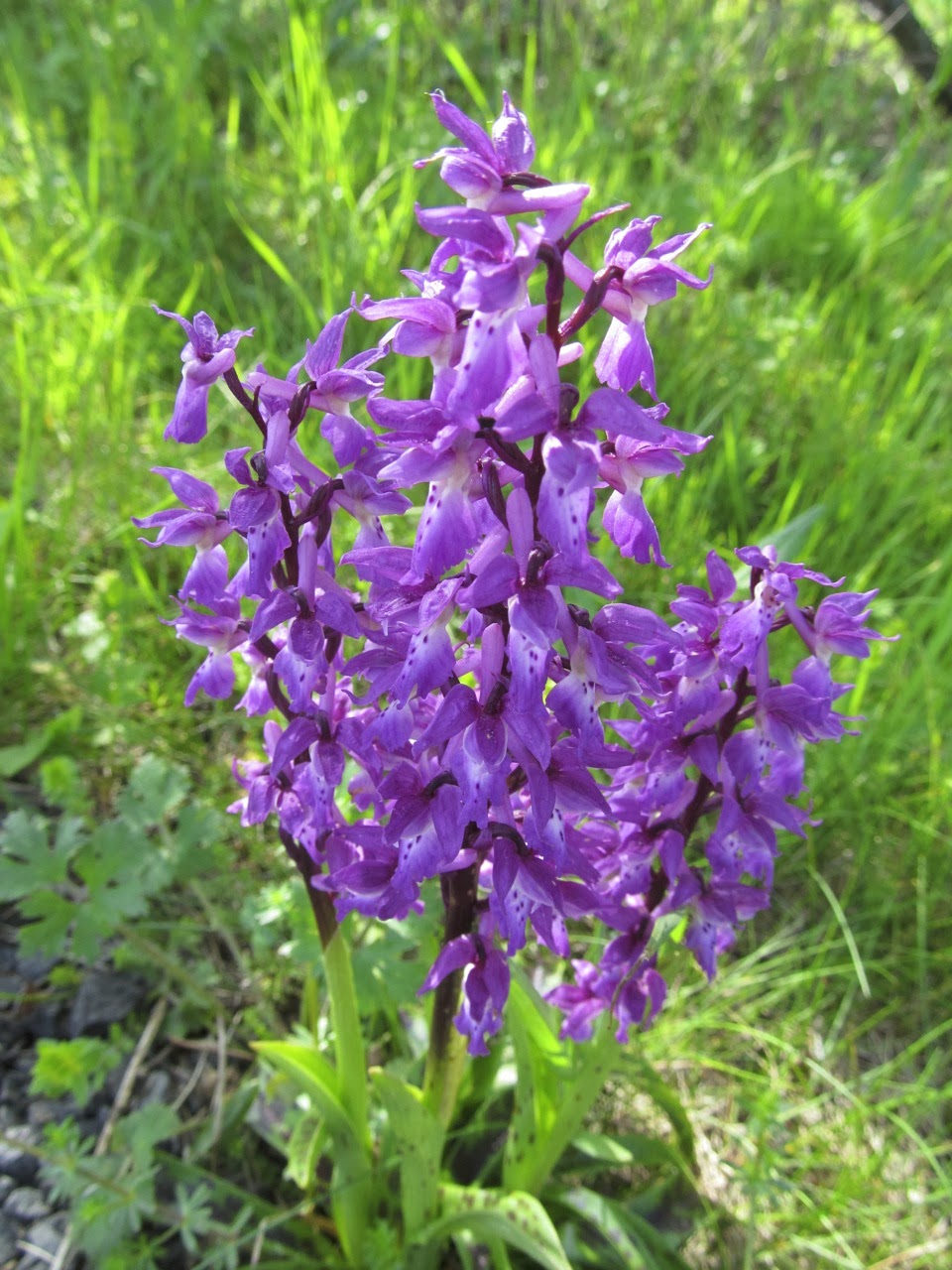 A cross along the way, with stones left on it by passing pilgrims. 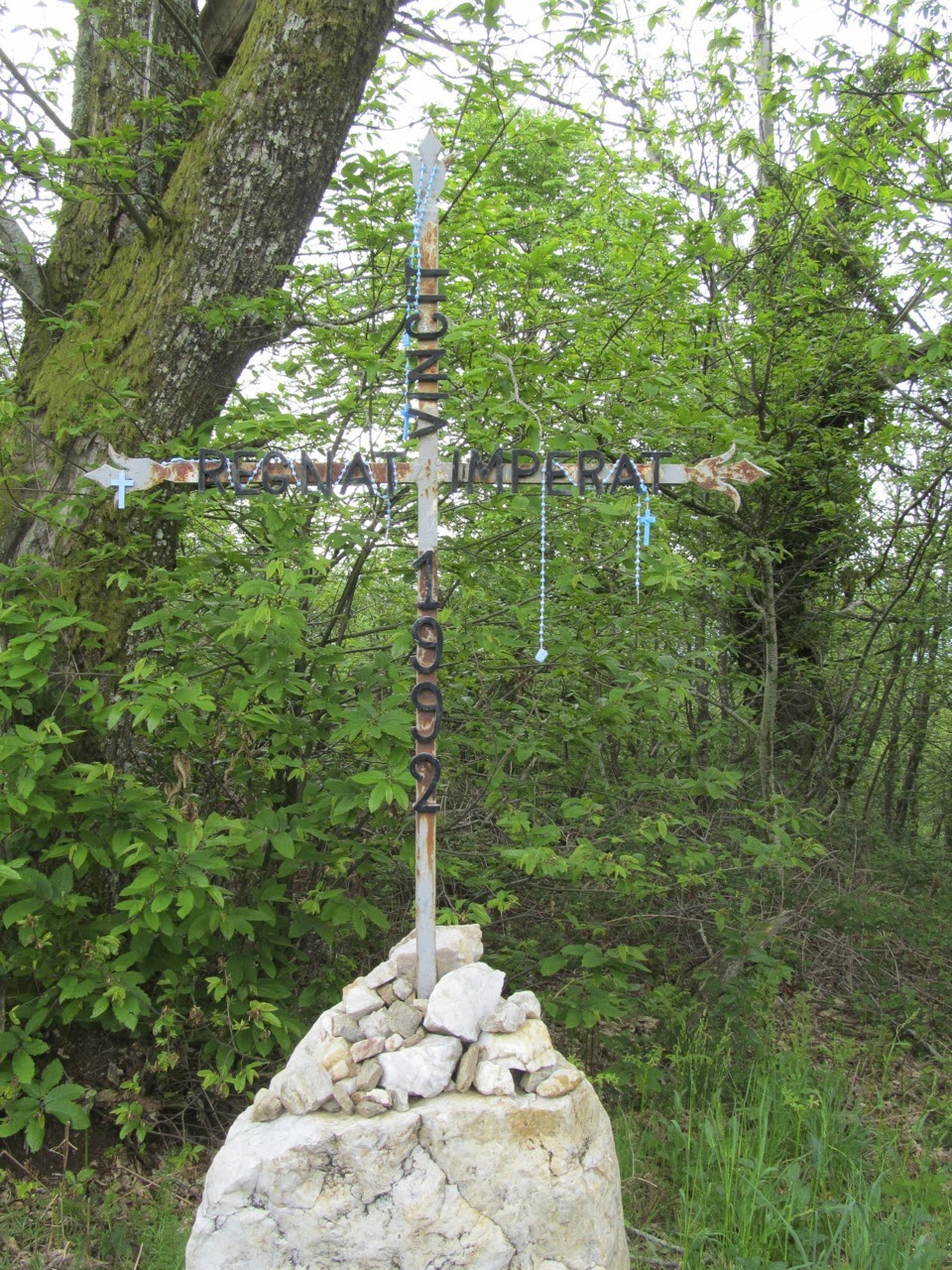 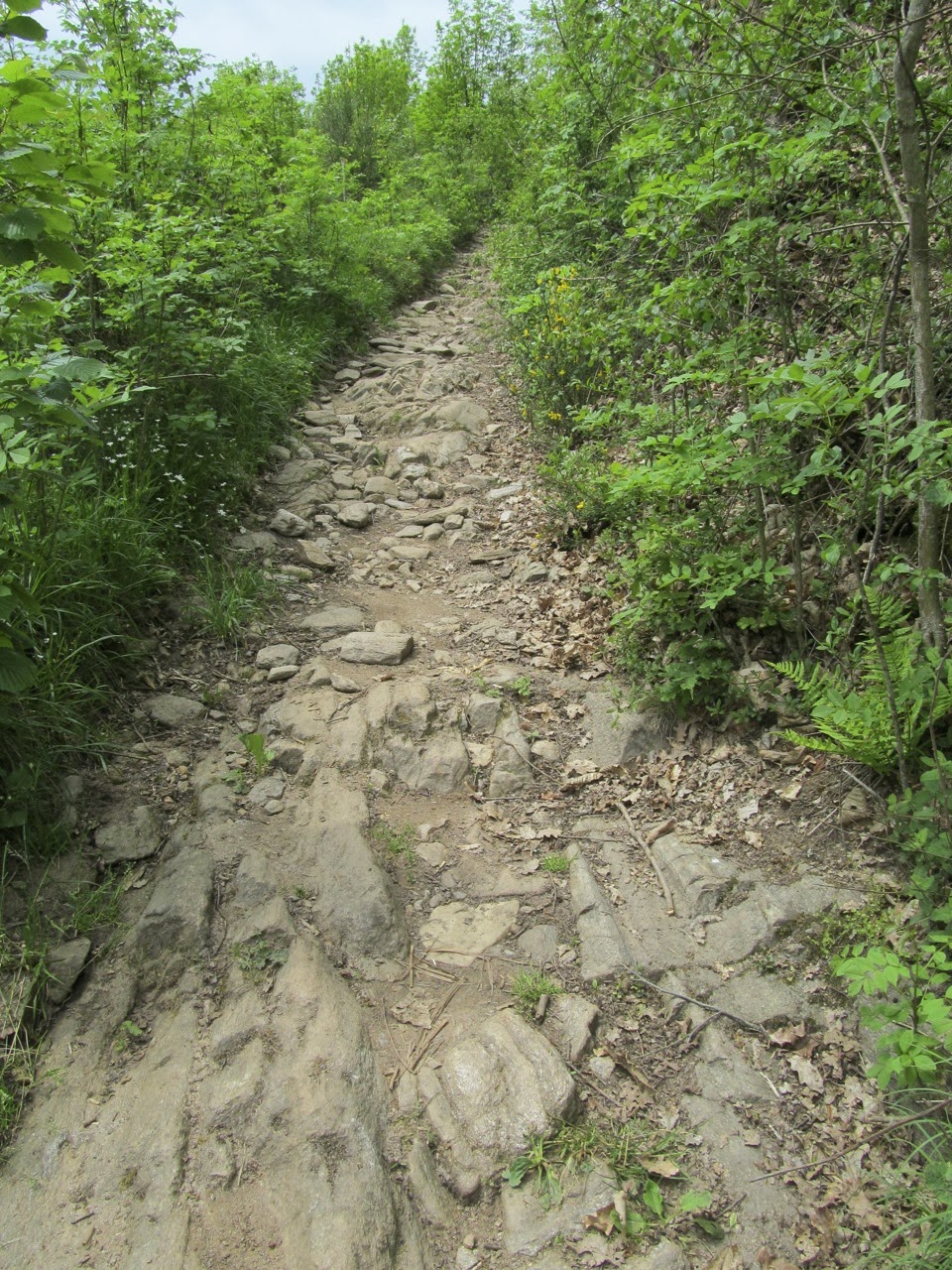 I had remembered finding the early afternoon section of the route really hard last time, but thought it was just that I hadn't brought any lunch with me and was hungry. I was to see that actually I was tired because there was a lot of climbing and the route was quite hard work in the heat. This time in the sunshine, the view of St Come d'Olt stretches out below. 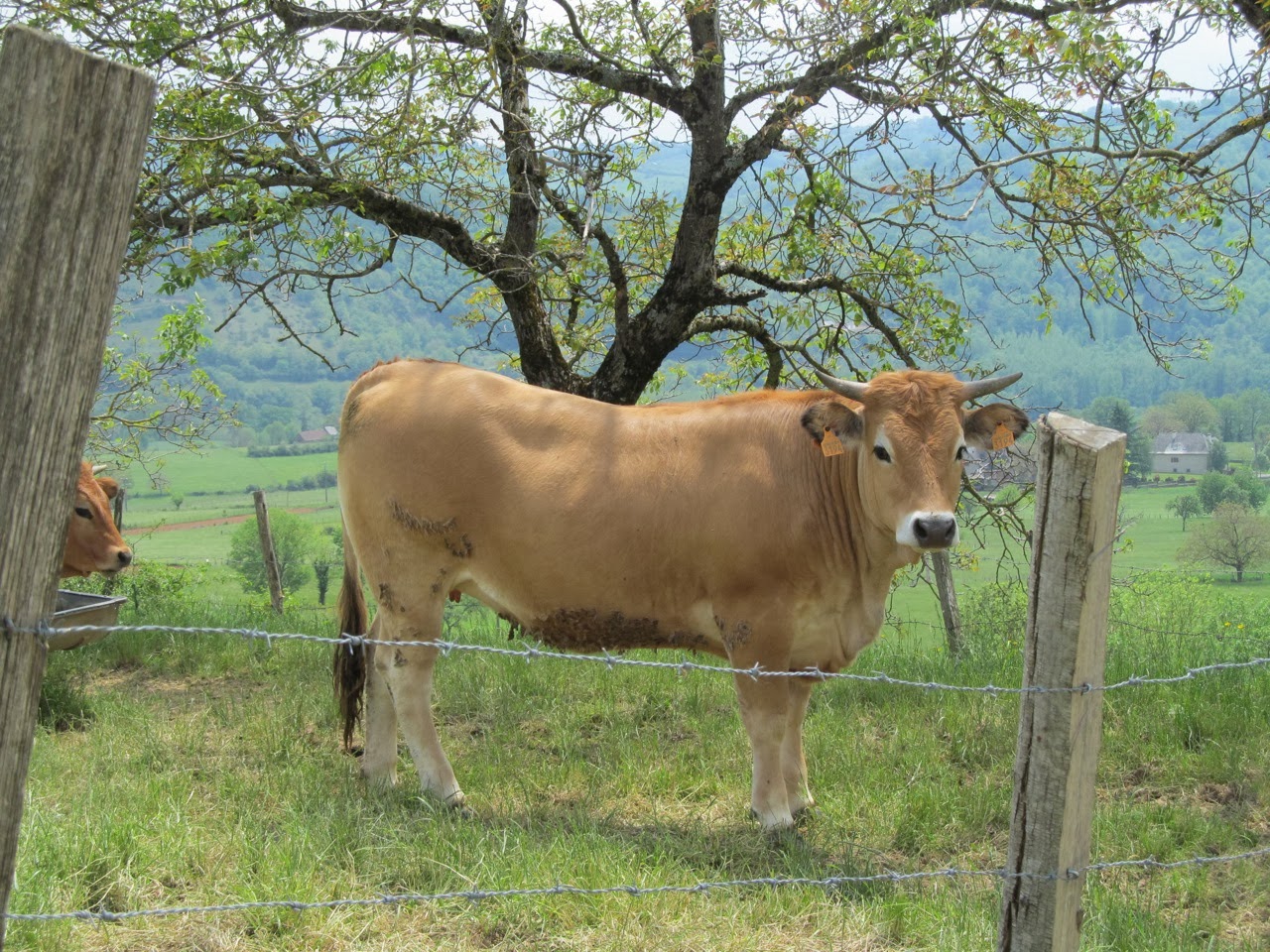 A cow waits alongside the track. 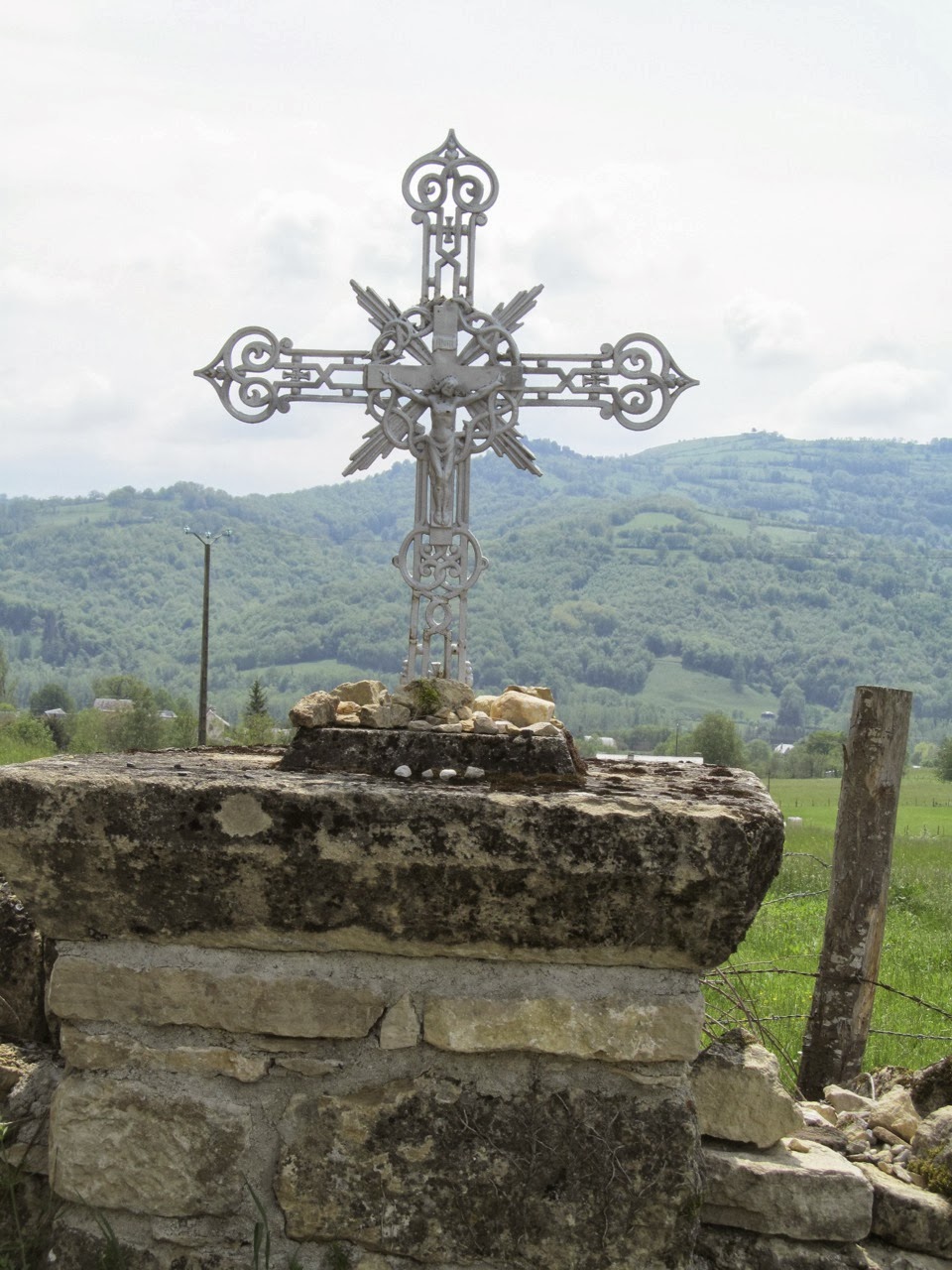 Another cross in the landscape. 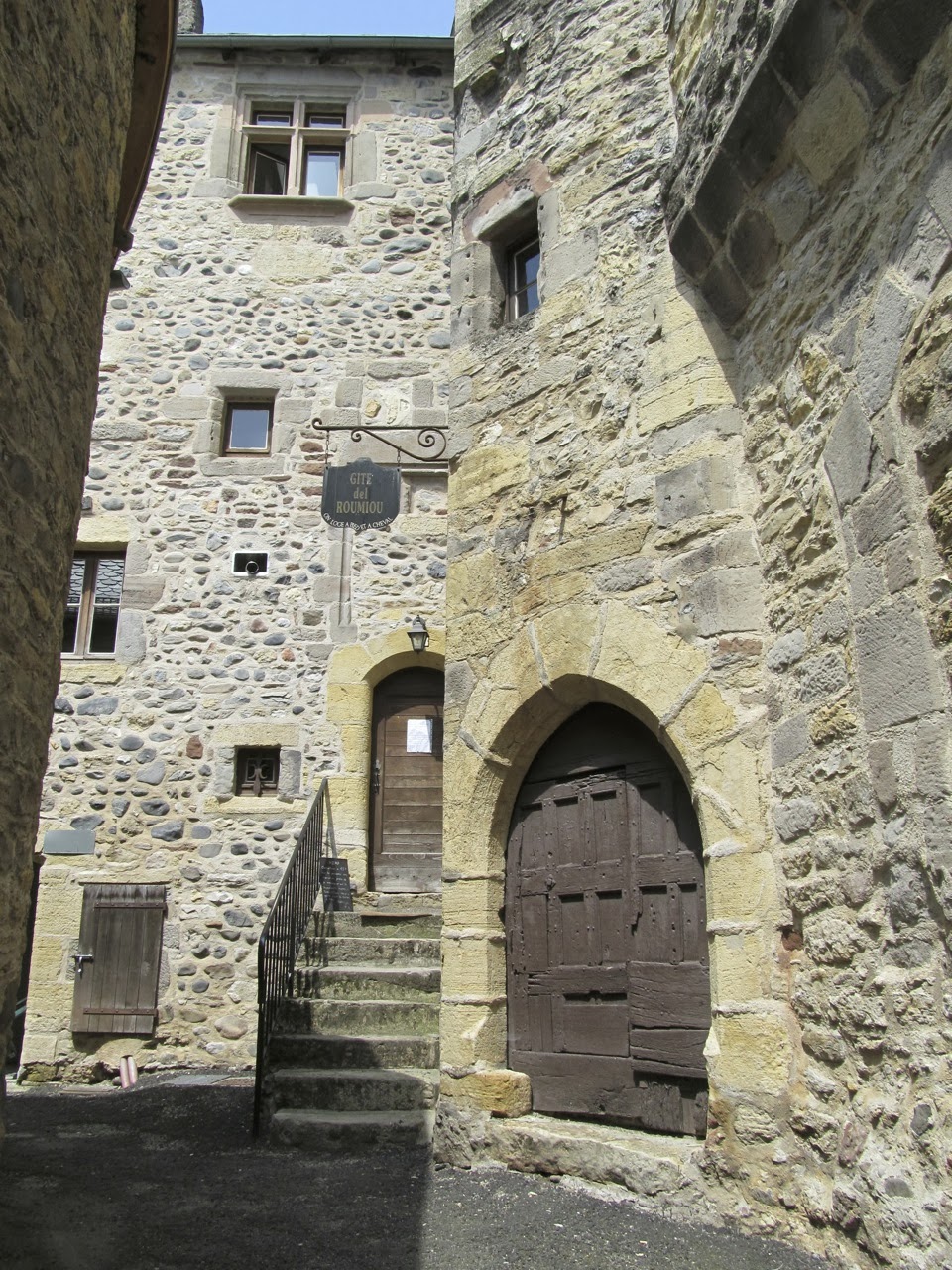 I stayed in the same communal gite- but here is a contrasting view of it with sunshine on the stones... 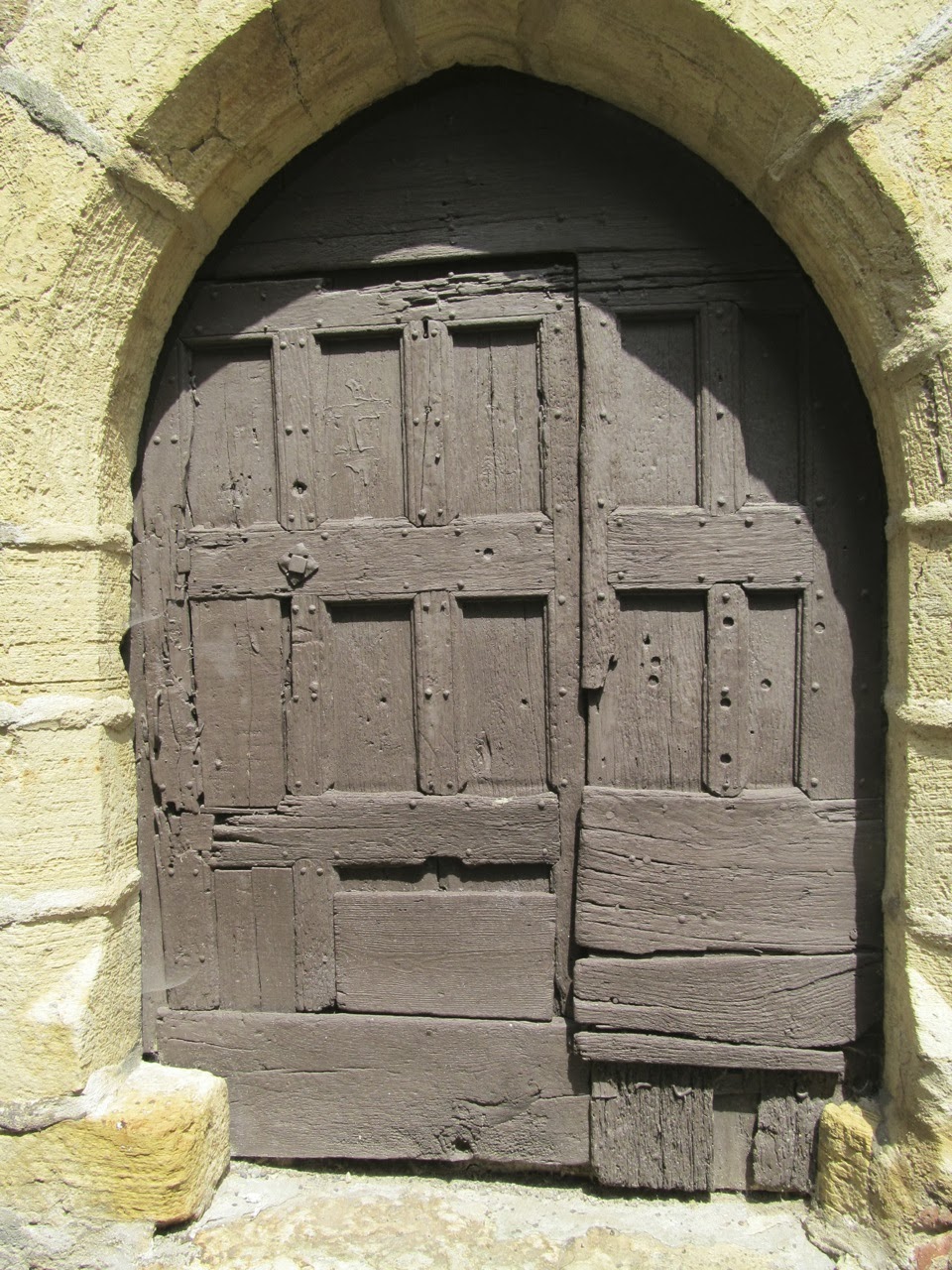 ...and sunshine on the old doorway. 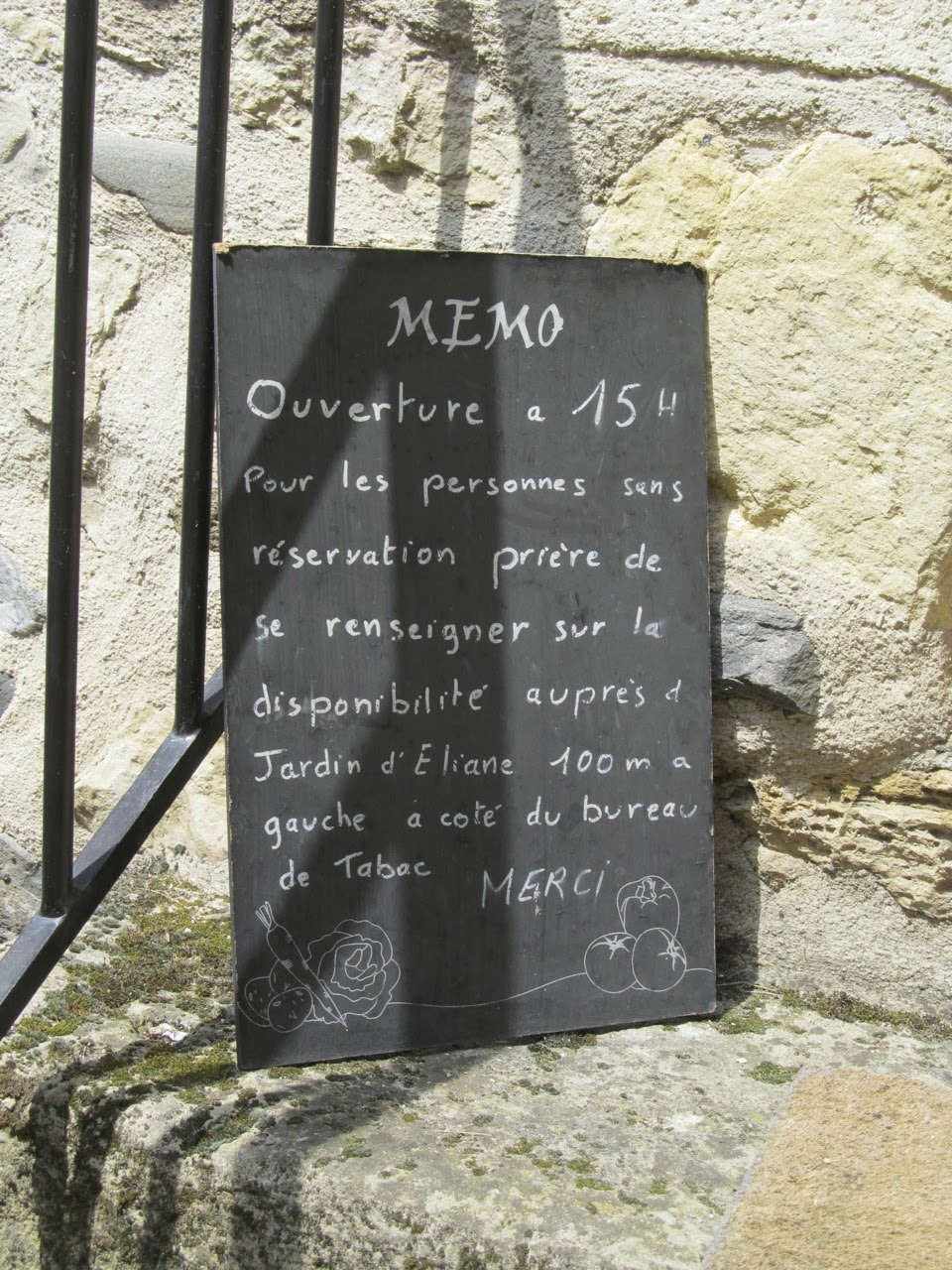 It was very hot when I arrived but the sign said the gite was open at 3, so I never even thought of trying the door...  I could have cooled off earlier with a shower! The people who own the local restaurant/hotel were supervising at the gite this time- which meant it was easy to reserve an evening meal there. That was great, as I remember not being able to find any food in this town last time and going a bit hungry.