I was concerned about finding my way out through the city of Pamplona, as the signage into the city hadn't been all that obvious in places. However, the signage was large and clear on the way out. It didn't seem to take long before we had reached the outskirts of the city, and were passing the Jacobean University. We decided to make the short detour to get a credential stamp there- and it was a particularly beautiful and delicate stamp. 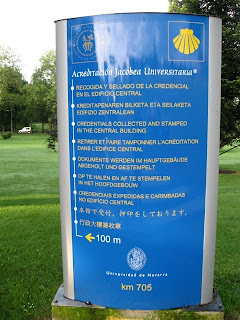 Soon I was walking on the way out to Cizur Minor, alongside a busy road, and alongside the morning rush hour of pilgrims, something I hadn't been used to in France.... 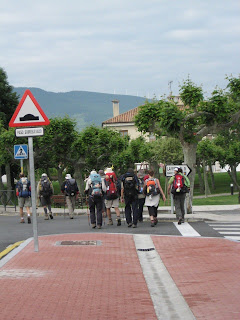 I loved seeing the castle on the hill with crops in front of it. 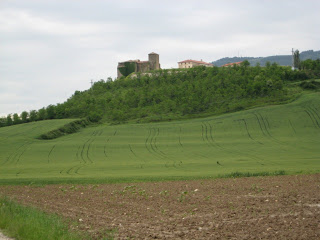 At this early stage of the Camino we had to make way for some cyclists. However, I think mostly they soon learned about the copious spring mud on the walking route, and quickly switched to a route with a surface kinder to modern gears! 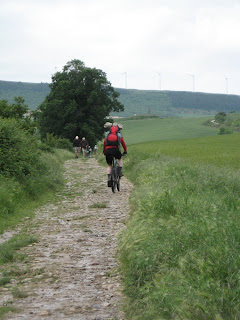 There was another climb today, so soon after the Pyrenees, and for some reason I felt tired and found it hard to psych myself up for it- perhaps because I wasn't yet adjusted to sleeping with more people in large dorms.... 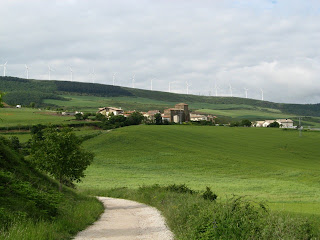 However, the well practised rhythm of my feet took over, and carried me along. Before too long, those distant windmills on the horizon became windmills nearby. 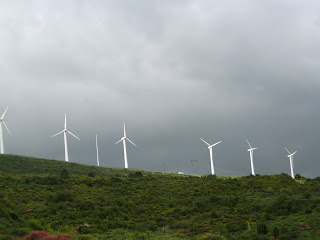 Before leaving home, I had already seen the pilgrim statues of Alto del Perdon many times on the internet. In some strange way, reaching these statues had become my necessary goal: so long as I reached them, I would be happy. If I had injured myself or become sick without climbing to them, I know I would have felt something was 'incomplete'. 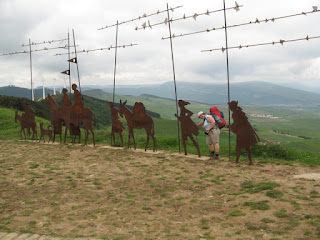 Not many people were hanging around long to examine these statues or to pose with them. But I knew it was something I really wanted to do! Luckily it was fine enough while I was on top of the hills to have lunch and spend some moments here. 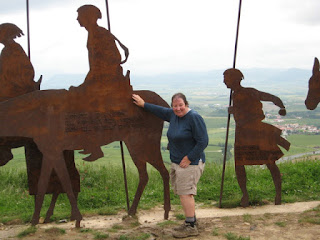 The clouds had begun to look threatening overhead while I was still on top, and it quickly began to rain a little on my descent... then to rain quite heavily.....and care was needed.... I met someone a few days later who was injured on this muddy descent. 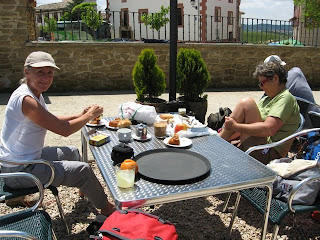 But by the time I reached Uterga it was sunny and warm, and the cafe was doing a great trade at its outdoor tables. I joined a couple of French women I had seen a few times, and had a cool lemon drink with ice. At the cafe I was surprised to see TSFH, in fresh, clean boots, unlike the muddy variety sported by everyone else. A reliable source told me she had caught a taxi thus far! She later arrived in the same albergue as me, but luckily there were separate rooms there with about eight beds in each... and we were not in the same room! 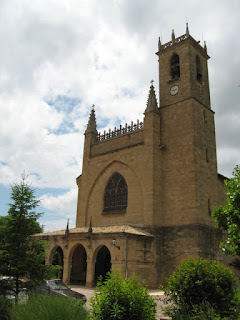 Obamos was an interesting village along the way, but I still had quite a distance to go for the day, so never explored far. The whole time in Spain I felt under a kind of time constraint I had not put myself under in France: I wanted to arrive in Santiago before the summer crowds became too huge, and I really wanted to avoid walking in too much heat. 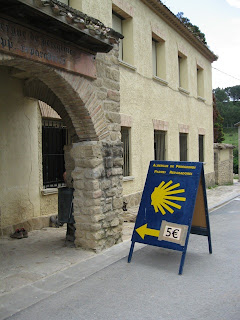 In Puente la Reina there were storks on the church tower, the first of many I was to see in northern Spain. I began to wonder what the storks did before humans invented church towers! The storks later retreated from view though, when yet again, the rain came down.
This afternoon, I found that I felt particularly tired: Puente la Reina looked like a very interesting town to explore, but I didn't seem to have the heart for it... There were days like that... when you were tired....